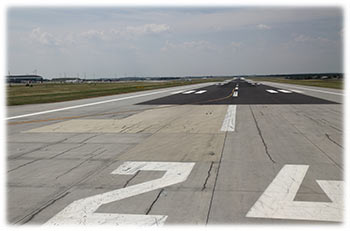 There is a plan to build a new take-off and landing runway, which will be parallel to the existing main runway 06/24. Although in 2004 the General Director of the Czech Airports Authority, Martin Kačur, announced the planned start of construction in 2007 and completed two years later, it was only on 27 October 2011 that the construction project got from the Ministry of Environment approval of the EIA (environmental impact assessment). The application had first been filed in 2005 and had garnered over 3600 comments. However, a part of the approval is 71 conditions; among other things, full discontinuation of the airport’s operating hours from midnight to 5:29 AM. In 2013, Prague Airport was completing materials for obtaining a zoning permit for the construction of the so-called parallel runway, which should be parallel to the existing main runway. Construction should begin in 2016, and the opening of a new runway could take place in 2019.

The current runway 06/24 is the main airport runway and is used for more than 80% of the airport’s traffic. The secondary runway 12/30 may be used to operate only in cases where it is not possible to use runway 06/24 for technical or meteorological reasons. This means that although Prague Airport has two runways, only one is used. The hourly capacity of a single runway is 46 aircraft movements (take-offs and landings), which ranks this airport among the best in Europe in terms of traffic flow on one runway (the absolute leader is London Gatwick Airport with a capacity of 46-50 movements depending on the ratio of take-offs and landings). However, even such capacity is not enough, and the airport runway system is currently overburdened.

The solution to the problem is the construction of a new parallel runway 06R/24L. It will be located 1525 metres south of the existing runway, which will be renamed 06L/24R. The new runway will be located in  ​​an original airport runway on 04/22, which will be cancelled. The new runway will have the dimensions 3550 x 60 metres. It will be equipped as an instrument runway for a precision approach with an ILS CAT IIIB facility in both directions (ILS CAT IIIB allows, e.g. automatic landing in zero visibility up to touching the ground). The investment in the new parallel runway will be CZK 9 billion.

Land for the parallel runway, despite their long-known strategic plan, was sold in 2003 by the Land Fund of the Czech Republic to private owners for the price of agricultural land. More than 70 hectares of this land was purchased by an investment group named Penta Investments in 2005 when it offered a better price than the state (500-1000 CZK/m²). Prague Airport acquired this land at the end of 2008. The land was considered to be crucial for the price of Prague Airport, which was being prepared for privatization. Net income of the transaction to the benefit of Penta should allegedly have been CZK 3-3.5 billion, with the price per square metre of land reaching approximately CZK 5500. According to the weekly EURO referring to credible sources, the investment group required CZK 10–12,000 per square metre (a total of more than seven billion crowns). Co-owner of Penta, Mark Dospiva, confirmed the price per square metre to be a negotiable price, still advantageous for the state. The transaction was ultimately realized not as a land purchase but through the purchase of shares by Realitní developerská company, allowing the reduction of tax payments for the country.

In 2005, the Parliament of the Czech Republic passed a special law No. 544/2005 Coll., on the Construction of the Runway for Take-Off and Landing 06R – 24L of the Prague-Ruzyně Airport, which declared the construction of the new runway as in the public interest, and the possibility of automatic expropriation of land being needed. In March 2009, the law was declared unconstitutional by the Constitutional Court and was annulled. Thus, the court complied with the proposal of 17 Senators, to which a further Senator, namely Karel Schwarzenberg, subsequently added his name.

A number of associations of local residents near the airport disagree with the construction of the runway, fearing deterioration of the environment in which they live. These include the Civic Association for Nebušice. The airport construction critics successfully challenged the illegality of the decision-making of Prague authorities before the Supreme Administrative Court when discussing a zoning plan.

The Municipal authority then adopted a new zoning plan. It was again challenged before the Supreme Administrative Court. However, the cessation complaint was dismissed. On 25 March 2009, the Constitutional Court concluded that the Supreme Administrative Court has to re-examine this case because the decision was “too formalistic” and “the Senate of the Constitutional Court did not find such a procedure as constitutionally conformable”. The Court’s verdict does not have an immediate effect on the runway project.