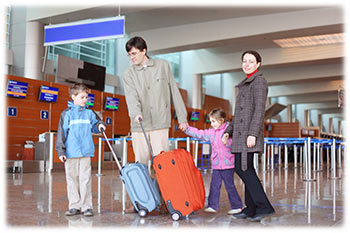 If you are travelling with a pram, the baby may stay in it until the very last moment before departure. A golf trolley-type pram can be taken on board. Pushchairs or deep prams must be folded during the inspection, pass through the X-ray, and subsequently used until boarding.

If children get bored while waiting for the plane, there are two play areas in the transit section of Prague Airport. In Terminal 1, you will find the play area on the left behind the security check. The second one is situated in Terminal 2 on the left after the passport check.

The play area in the toy shop “Bambule” in the connecting departure hall between Terminal 1 and 2 is permanently available. Here, children will find a broad selection of toys (mostly with an aviation theme) and many games and construction kits and climbing frames, swings, and much more.

Older children may amuse themselves in the Airport Museum, where they can look around the large-format photo gallery documenting significant stages of the development of the airport and watch documentary films on the history of the airport. The museum is located in the public area of the departure hall at Terminal 2 before the entrance to the scenic terrace.